SSNs for Canada - Potentially a Bargain 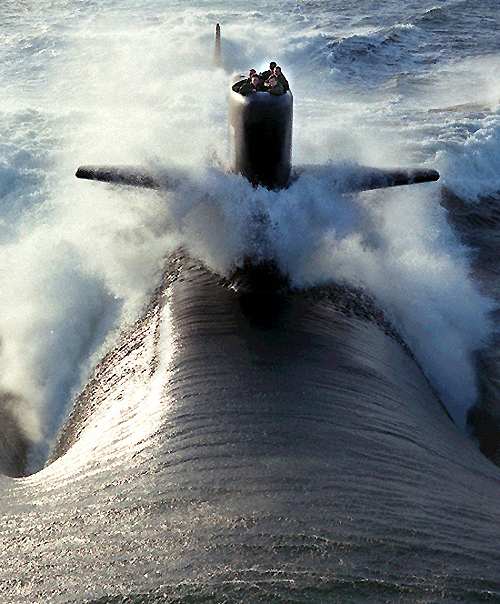 CBC News is reporting that the Harper Government is at least pondering the idea of cutting their losses with the Victoria class submarines and replacing them with nuclear submarines. The Victoria class submarines have been plagued with problems since being acquired from the UK, and despite being described as the "military bargain of the century" when purchased for $750 million in 1998, they have become anything but.

The submarines are currently all out of service, with HMCS Victoria the soonest to potentially return to service by late next year. The article describes the issues.

One of the subs, HMCS Chicoutimi, has been in active service of the Royal Canadian Navy exactly two days in the 13 years since it was purchased from the Brits.

The Chicoutimi caught fire on its maiden voyage from the U.K. to Canada, killing one sailor and injuring a number of others.

It has been in the repair shop ever since, and isn’t expected back in service for at least another two years and $400 million more in repairs and retrofits.

The article goes on:

The other three would remain out of service until at least 2013. One may not be out of the repair shop until 2016.

By that time, the submarines will have cost taxpayers an estimated $3 billion, almost enough to have bought all new subs in the first place.

But the real problem is that by the time the whole fleet is in active service for the first time in 2016, the submarines will already be almost 30 years old with only perhaps 10 years of life left in them.

High-ranking sources tell CBC News the government is actively considering cutting its losses on the dud subs, and mothballing some if not all of them.

Defence Minister Peter MacKay is hinting they might be replaced with nuclear submarines that could patrol under the Arctic ice, something the existing diesel-electric subs cannot do.

I'm not sure how the costs break out over a single budget year, but based on the article it sounds like Canada has already spent $1 billion and will spend $2 billion more by 2016, which suggests costs that average around $500 million over the next 4 years. That's a lot of money just to get 10 years out of four SSKs.

If we do the math, basically the Harper government is faced with the very real problem. The repair costs will earn Canada 4 Victoria class SSKs that are already old for an investment cost of at least $75 million annually per submarine, and at the same time India is leasing the significantly more capable and new Russian SSN K-152 Nurpa for $900 million over 10 years - $90 million annually.

Something tells me Rep. Joe Courtney (Conn) could come up with a few ideas here - just saying. What would it cost to refuel and refit a Los Angeles class submarine for a second time to add 15 or so more years to the submarine? In 2005 the cost was slightly over $200 million, so even if we estimate the total refit per submarine to be around $350 million (serious modernization), Canada would only be spending $1.4 billion for four SSNs with a service life of 15 years vs $2 billion for four SSKs with a service life of 10 years. Another big advantage for Canada would be they could use the rest of the money to put their sailors through existing US Navy submarine training schools and use existing US contractor services for upkeep, both of which would allow Canada to save a bunch of money.

The cost difference for the hardware would be $25 million per sub per year for SSNs vs $75 million per sub per year for SSKs. While it is true the operational, maintenance, and personnel costs will be higher for SSNs than it would be for SSKs, there are likely enough cost savings to be gained through existing US infrastructure that it's hard to believe the SSNs would be so much more expensive as to make it a bad deal.

I'm just floating this idea, but really trying to highlight that leasing Los Angeles class SSNs would likely be cost neutral (or perhaps even cost saving) for the Harper government given the big problems Canada is facing with the Victoria class.

I don't know if the US Navy even has four 688s that they would be willing to sell to Canada (although in a time of short term budget cuts impacting the Navy, now is the time to talk about this type of thing). I also don't know if the US and Canada can work out a realistic agreement that would give Canada the ability to utilize US Navy infrastructure for training and other services related to 688s. I do know that going down the road of supporting foreign SSNs would be good for either/both Electric Boat and Newport News, because when one looks at the trends they are having in Australia with their submarine industry - a deal with SSNs with Canada now would go a long way towards getting process and framework for this type of high end military deals in place so when our next very close ally comes along - we have a system and experience in place to support such agreements.

Funds must be allocated in the May budget for early design work on Australia's next submarine if a serious capability gap is to be avoided, Defence experts have said. Time is running out if new submarines are to be in operation by 2025 the date proposed in the latest Defence Capability Plan update. That plan and the 2009 Defence White Paper calls for the construction of 12 new submarines at a cost of at least $36 billion. They would replace the six Collins class submarines currently in service. Experts from the Australian Strategic Policy Institute have said that given this will be Australia's most expensive ever weapons program and a similar spend to the National Broadband Network pressure from the Government and voters for sound planning and effective delivery would be intense. Defence insiders have already said, off-the-record, the Navy is dreaming if it expects the Government to sign off on the 12-boat plan this year. Mark Thomson, the director of budget and maintenance at the Australian Strategic Policy Institute, said the Government needed to use the budget to get the project moving. A failure to do so would likely result in the existing boats reaching the end of their effective lives before their replacements were ready to put to sea. This had happened in the transition from the old Oberon class boats to the Collins class between 1992 and 2003. While Defence had started winding back the use of the outdated O-boats in the early 1990s, the Collins class boats were not fully operational until 2003. Andrew Davies, ASPI's operations and capability director, said this created a decade-long capability gap that had seen many experienced submariners lost to the fleet. The Collins class boats have been plagued by crew shortages ever since. Mr Thomson, who worked with Mr Davies on a discussion paper on the submarine replacement issue that was released late yesterday, said the Government was due to make a ''first pass decision on the shape and size of the next submarine fleet in the next two years''. Once that was done, the initial design work expected to cost between $500 million and $1 billion could begin. The problem is that at the moment Defence does not have the information it needs to make informed recommendations to Government he said. Mr Davies agrees. ''You need to understand the true costs and benefits if you are to do an informed cost benefit analysis,'' Mr Davies said. He said Defence had a history of playing down costs while playing up benefits. At this point, despite the White Paper recommendations, the only certainties surrounding the next generation of submarines is that they will be conventionally powered and they will be built in Adelaide. Political factors have at least partly driven those parameters. The size of the boats, the numbers to be built and the tasks they should be required to perform are yet to be determined, Mr Davies said. He described the White Paper recommendation as an ''ambit claim'' and questioned the need for the submarines to be able to deploy special forces units. Mr Davies said it was difficult to conceive of a circumstance under which the need to land a small group of men on a beach would justify placing a $3 billion submarine at risk. Meanwhile, others haven't given up the fight for the nuclear option. Graham Harris, the president of The Navy League, has called for nuclear power to remain under consideration.

Click here to download the related report “The once and future submarine: raising and sustaining Australia’s underwater capability” (7 pages in PDF format) from the ASPI website.