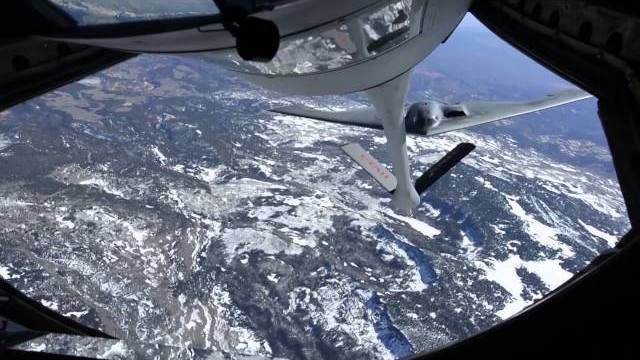 A Utah Air National Guard aircrew from the 151st Air Refueling Wing, Salt Lake City, Utah, man a KC-135 Stratotanker during an aerial refueling mission on February 18, 2015 in the skies over Montana.

An F-15C Eagle from the 493rd Fighter Squadron takes off from Royal Air Force Lakenheath, England, March 6, 2014. The 48th Fighter Wing sent an additional six aircraft and more than 50 personnel to support NATO's air policing mission in Lithuania, at the request of U.S. allies in the Baltics. (U.S. Air Force photo by Staff Sgt. Emerson Nunez/Released)

ROYAL AIR FORCE LAKENHEATH, England -- The 48th Fighter Wing has sent additional aircraft and personnel to support NATO's air policing mission in Lithuania, at the request of U.S. allies in the Baltics.

Nearly 150 Airmen and four F-15C Eagles from the 48th FW have been supporting the Baltic Air Policing mission out of Šiauliai Air Base, Lithuania, since January as the 48th Air Expeditionary Group.

"This is the advantage of being forward-based," said Col. Mark Ciero, 48th Fighter Wing vice commander. "If called upon, we can quickly respond to support our allies and partners."

Air policing is part of NATO's "Smart Defense" model that incorporates allied nations conducting operations through shared capabilities and coordinated efforts to effectively accomplish missions. NATO countries rotate to provide Airmen and aircraft for the BAP mission, which is slated to continue through 2018.

In the last decade, 14 NATO nations have participated in this mission. This deployment marks the fourth rotation for U.S. forces.

Air Force generals received another reason Monday to keep pushing Congress to deliver funding for the KC-46A tanker program even in the midst of this budget environment.

A KC-135 Stratotanker made an emergency landing Monday at Sol San Juan airport in Palma De Mallorca. The tanker based out of McConnell Air Force Base in Kansas took off from a Spanish air base in Moron.

The Stratotanker was forced to land after a suspected fuel leak was suspected, officials said.

The KC-46A remains the Air Force’s top modernization priority at a time when service officials get few choices on what acquisition program they want to deliver. The KC-135 has been in service for more than five decades and remains an integral part of the Air Force’s fleet.

This is not the first emergency landings for the KC-135 this year. The aircraft has been forced to land because of engine and landing gear problems. Wouldn’t be surprised to hear about those landings in future Congressional hearings. Of course, that’s if the government reopens.