Infantry: Robots Hurry Up And Evolve 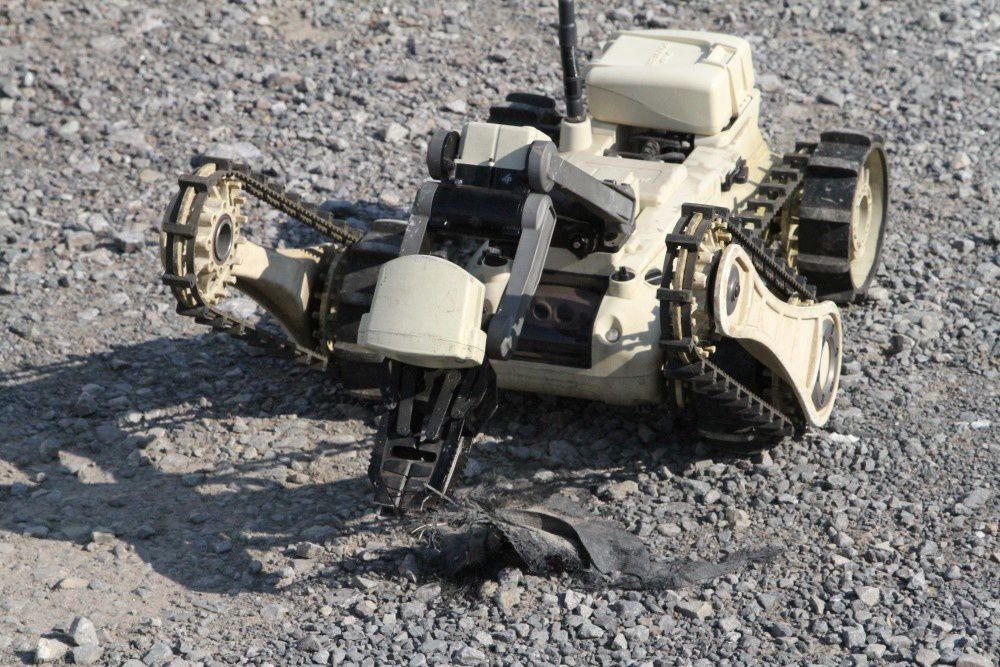 An Israeli firm has managed to sell some of its small battlefield robots to the American military, which is a first for an Israeli firm. The U.S. Air Force has ordered over 200 Israeli MTGR (Micro Tactical Ground Robot) for their bomb disposal teams. This came after MTGR demonstrated its capabilities during the 2014 war with Hamas in Gaza. This was particularly true with the large number of Hamas tunnels discovered. These proved more complex and dangerous than any previously encountered and a new robot was needed to deal with the situation. Within days a specification was provided to Israeli robot manufacturers and by the end of July 2014 a new robot design had been accepted, in production, delivered and in action. This was the MTGR and while it was not a major breakthrough, it was simply a better application of design elements that had been developed since the 1990s and suited current Israeli needs. The Israelis have ordered over a hundred MTGRs for delivery ASAP. Based on its success in Gaza MTGR is being offered to other armed forces and police departments around the world.

MTGR is a 7.3 kg (16 pound) tracked (or wheeled version weighing 9 kg) robot. Tracks are preferred for climbing stairs and getting over obstacles. MTGR can carry up to 9 kg of accessories. The basic MTGR comes with five cameras, a microphone, and can carry additional sensors. The cameras have day/night capability, 360 degree views and x10 zoom. One of the more useful accessories is a robotic arm for clearing debris or searching. Another useful item are bright LED lights when you need illumination. MTGR uses GPS and can carry a laser rangefinder to measure dimensions of where it is. The battery lasts 2-4 hours depending how onboard equipment is used. Top speed is 50 meters a minute and max range for the operator is 500 meters.

MTGR is designed to be carried in a backpack and an operator can use the handheld control unit to operate several MTGRs at once. The MTGR was a lifesaver for exploring Hamas tunnels, which are often filled with booby traps and other nasty surprises for advancing Israeli troops. Often an MTGR was simply sent down, take a lot of measurements and pictures and then withdraw after which explosives will be lowered down and the tunnel collapsed. If MTGR detects documents or electronic devices like laptops, tablets or cell phones, MTGR will carefully survey the area and troops will go down to recover the valuable intel often found on such devices. If MTGR can reach cell phones or small tablets it can pick them up and carry them away.

What made MTGR special was the firm that provided it demonstrated that it was able to take existing technologies and quickly adapt them to new situations. The small firm that developed MTGR it had an existing design modified and readied for production in less than a month. In wartime this is a very valuable capability. This has now been demonstrated under combat conditions and the rest of the military robot industry has to adapt.

The U.S. Army has been using robots like the MTGR since the 1990s. American designs went through rapid refinement after September 11, 2001 because thousands of these robots were bought and used by American troops in combat. The culmination of all that was expressed in the XM1216 SUGV (Small Unmanned Ground Vehicle). SUGV was designed to be the definitive next generation infantry droid, replacing existing droids like the similar but larger PackBot. Not surprisingly MTGR is based on the same experience but more refined and using some newer technology.  This design was not ready for action until most of the fighting in Iraq and Afghanistan was over. Thus by 2012 only about 200 of these combat robots were in service or on order. It was only in 2011, after more than six years of development, that the army bought its first production model SUGV. Many in the U.S. Army were not satisfied with how long it took to get SUGV to the troops and MTGR is proof that it could have been done faster.

Before September 11, 2001, the army didn't expect to have robots like PackBot or SUGV until 2013. But the technology was already there, and the war created a major demand. The robots expected in 2013 were to be part of a new generation of gear called FCS (Future Combat Systems). SUGV is still waiting for some of the high tech FCS communications and sensor equipment (which MTGR used), and appeared in 2011 using off-the-shelf stuff in the meantime. The troops don't care, as long as it worked. These small robots have been quite rugged, having a 90 percent availability rate.

The overly ambitious, expensive and much delayed FCS program was cancelled in 2009 but successful bits, like SUGV, were allowed to keep moving. This was a big deal for SUGV, because demand for these small droids collapsed when the Islamic terror offensive in Iraq did in 2008. There were plenty of droids left over for service in Afghanistan, where the Taliban provided a much lower workload for the little bots than did Iraq.

SUGV is a 13 kg (29 pound) robot, similar to the slightly older and larger Packbot. SUGV can carry 3 kg (6.6 pounds) of gear, and seven different "mission packages" are available. These include various types of sensors and double jointed arms (for grabbing things.) SUGV is waterproof and shock resistant. It fits into the standard army backpack, and is meant to operate in a harsh environment. The battery powered SUGV is operated wirelessly, or via a fiber optic cable, using a controller that looks like a video game controller with a video screen built in. SUGV can also use an XBox 360 controller, with the right drivers. Like the earlier PackBot and later MTGR, SUGV can climb stairs, maneuver over rubble and other nasty terrain.

The SUGV design is based largely on feedback from combat troops. For example, it is rugged enough to be quickly thrown into a room, tunnel or cave, activated and begin sending video, as well as audio, of what is in there. This feature makes it very popular with the troops, who want droids with the ability to see, hear and smell were more acutely. No one likes being the first one going into dark, potentially dangerous, places. Throwing a grenade in first doesn't always work, because sometimes frightened civilians are in there. Despite all these fine qualities, the current generation of robots is not fast enough, agile enough or sensitive enough to compete with human troops doing this kind of work. Sometimes, however, the robots are an adequate, and life-saving, substitute. SUGV is supposed to be better at this sort of thing.

SUGV can also perform outpost and listening post work. These are two dangerous jobs the infantry are glad to hand off to a robot. Outposts are, as the name implies, one or two troops dug in a hundred meters or so in front of the main position, to give early warning of an enemy attack. A listening post is similar, but the friendly troops are often much deeper into enemy territory. The SUGV battery enables it to just sit in one place, listening and watching, for eight hours or more. After that, you send out another SUGV with a fresh battery, and have the other one come back for a recharge. No risk of troops getting shot at while doing the same things, and the troops really appreciate that. Again, the problem with this is that the robot sensors are just not there yet. The sensors are getting close, but not close enough for troops to trust their lives to this thing.

Other dangerous jobs for the SUGV are placing explosives by a door (to blow it open for the troops), or placing a smoke grenade where it will prevent the enemy from seeing the troops move. Since 2006 users of the older PackBot UGVs filled military message boards with interesting uses they have found for these robots, and new features they could make use of. SUGV and MTGR are the products of all that chatter.