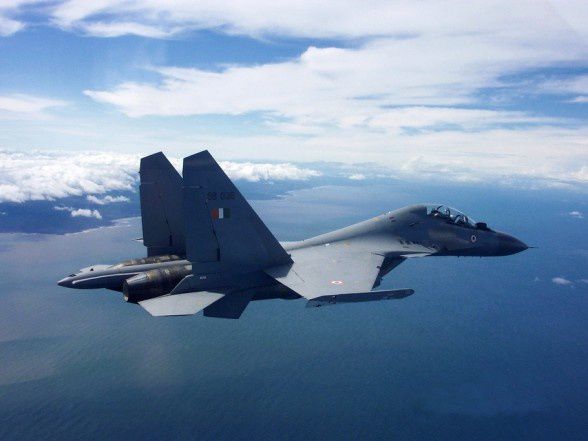 NEW DELHI --- Sukhoi-30 MKI, the most powerful and modern fighter jets in Indian Air Force's stable, has been hit by mid-air engine failures. Defence Minister Manohar Parrikar said in Parliament today that as many as 35 instances of engine failures were reported in 2013-14 - that's nearly three a month.

In all, there are 69 instances of engine failure in the last four years, the minister said. Inquiries by the Air Force have revealed that in as many as 33 instances, the engines failed because of impure fuel, in another 11 cases, the problem was caused by excessive vibration and in eight others, engine failures were reported because of low pressure in the lubricant tanks, the Defence Minister said. About five SU-30 MKI have crashed since 2009.

Like all twin-engine jets, the Russian made Su-30s are capable of landing on a single engine. But to reach its maximum potential of carrying a total eight tones of payload including bombs, missiles and spare fuel tanks, the jet needs both its AL-31FP engines to function.

Engine failures is fast becoming a major concern for Air Force and also puts a question mark on India's ability to defend its skies. Another problem area that senior Air Force officers point out is serviceability. "Serviceability of the aircraft is about 50 per cent only," an officer said. It means at any given time, roughly half out of a fleet of 200 jets are available for operational purposes. This becomes crucial in times of emergencies like war.

Mr Parrikar said that the engines were scheduled to be overhauled after every 1000 hours of flying, but the defects started showing-up after only 500 hours of flying. The minister said that Russia-based NPO Saturn, manufacturers of Su-30 Al-31FP engines, offered to make "nine technological improvements" during overhauls, and added that after the modifications the engines were flying for upto 900 hours.

To address the growing capability gap, especially that created by increasing obsolescence of MiG-21, India is talking to France to buy 126 medium multi-role Rafale fighter jets. But the negotiations have been dragging on for three years. Although the acquisition has got mired on per unit cost and number of man hours required to produce it in India, a resolution of these issues can be expected when Prime Minister Narendra Modi visits France in April.