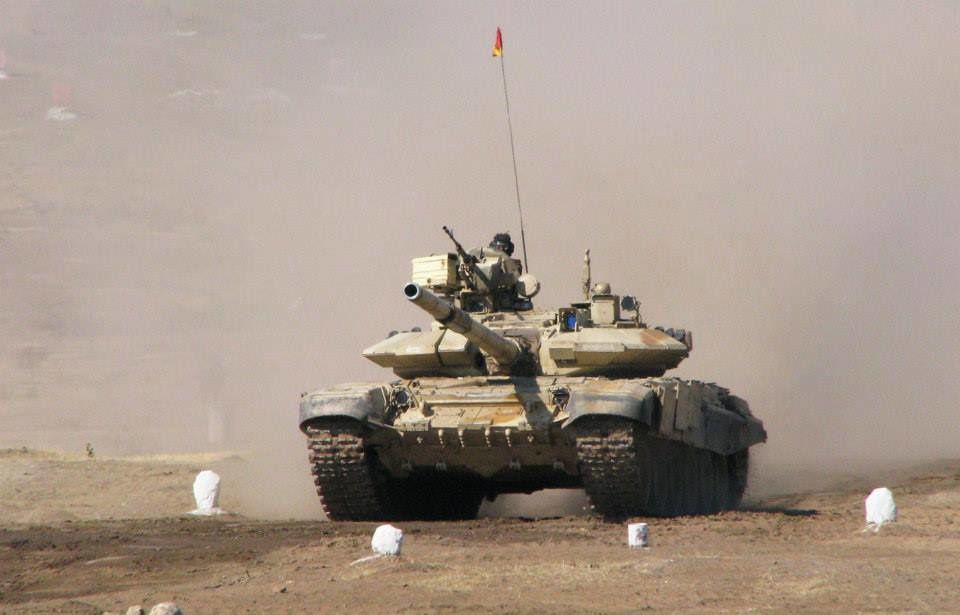 Algeria has signed a contract for the license assembly of around 200 T-90 main battle tanks with Russian arms exporting firm Rosoboronexport.

According to Moscow Defence Brief, the deal, signed last year, is worth around $1 billion. Russian business newspaper Vedomosti, quoting defence sources, on Friday said that this follows on a contract for the delivery of 185 T-90S tanks, delivered between 2006 and 2008 in a deal worth $1 billion. According to the Stockholm International Peace Research Institute (SIPRI), another 120 T-90S tanks were delivered between 2012 and 2013 under a 2011 deal worth $470 million.

The T-90 is a modernised version of the T-72, but although developed from the T-72, it uses a 125 mm 2A46 smoothbore tank gun, a new engine, and thermal sights. Standard protective measures include a blend of steel, composite armour, and Kontakt-5 explosive-reactive armour, laser warning receivers, Nakidka camouflage and the Shtora infrared anti-tank guided missile (ATGM) jamming system.

Algeria is acquiring a significant amount of military hardware as it continues with the massive overhaul of its military. According to the United Nations Register of Conventional Arms, some of Algeria’s imports in 2013 included ten armoured combat vehicles and 101 Russian main battle tanks (obviously T-90S tanks), 24 Fuchs vehicle kits from Germany, 60 73 mm HATGL recoilless rifles and 214 light machineguns from Bulgaria and eight air-to-surface missiles from South Africa.

Algeria is buying around 1 200 Fuchs APCs from Germany, which will assemble them in the North African nation, and is also jointly producing the NIMR vehicle in conjunction with the United Arab Emirates.

The Algerian Air Force is also getting a boost with the acquisition of up to six Mil Mi-26T2 heavy lift helicopters and 42 Mi-28N Night Hunter attack helicopters while 39 of its Mi-171Sh helicopters will be modernised. The second Mi-26T2 was seen undergoing flight testing in Russia earlier this month.

Russia is a major supplier to Algeria, which is one of the world’s leading arms importers. Rosoboronexport, owned by state conglomerate Rostec, sold more than $13 billion worth of military equipment in 2014 and hopes to sell just over $13 billion this year. Rosoboronexport on Monday said its orders portfolio stands at $38.5 billion.

India is upgrading 600 of its Russian T-90 tanks with new electronics (navigation systems, thermal sights and fire control computers) and air conditioning at a cost of about $42,000 per tank. The main reason for air conditioning in the tanks is not the crew, but the electronics. Russia was asked to develop and install air conditioning but were unable to create a system that could handle the Indian climate. That failure caused a lot of damage to the Russian and foreign made electronics in the Indian T-90s, thus the need for these changes.

One of the most obvious reasons for this upgrade was the heat related problems. Despite years of effort India was unable to get the thermal imaging systems to operate reliably on its T-90 tanks. Most of the thermal imagers on the T-90s were down at any one time. The problem was eventually found to be heat, and the 40 degree (Celsius/104 Fahrenheit) heat is unavoidable because it's a desert area where Indian T-90s have to be stationed. The Indians paid $2.6 million for each tank (half the price of the U.S. M-1). Some 20 percent of the cost was for the thermal sight, similar to the one that makes the U.S. M-1 tank so effective on the battlefield. Unfortunately, tests of the T-90 revealed that the thermal sight system could not handle the heat of Indian summers once the air conditioning failed. Much of the border between India and Pakistan is desert, and most of India's armored units are stationed there. The problem is that while the T-90 had Russian developed air conditioning (something new in Russian tanks), it cannot handle the 100+ degree heat in tropical India. The Russians were unable to develop a suitable upgrade because there was no room inside the tank to install a more powerful, but larger, cooling system. The American M-1 air conditioning has been able to handle extreme heat, so the Indians knew it could be done and eventually found a supplier who could build a system that worked and fit into the space available.

The T-90 went into low level production in 1993, but was too expensive for the Russian army to buy more than a few of them. India eventually became the biggest user. The T-90 is based on the T-72, but has composite armor (plus reactive armor) and better electronics. The 50 ton tank uses a 125mm smooth bore gun, and can also fire the 9M119M Refleks-M missile (to 4,000 meters) at ground or air (helicopter) targets. The tank carries 43 tank shells or missiles, 22 of them in the autoloader carousel. India agreed to buy 310 T-90s initially and is to have over 1,600 of them by the end of the decade, most of them assembled in India using Russian made parts.

One big reason India bought the T-90 is the 9M119 (AT-11) anti-tank missile, which weighs 23.6 kg (52 pounds), has a range of 100-4,000 meters and uses semi-automatic laser beam guidance system (the gunner keeps his sight on the target and the missile homes in on that.) Maximum time of flight is about 12 seconds. While the missile has a tandem warhead, making it useful against tanks with reactive armor, it can also be used against helicopters. The missile warhead can penetrate about 700mm of armor. The guidance system is quite accurate, hitting the target 80 percent of the time at maximum range in tests. The guidance system is also easy to use, making less well trained crews more effective. However, India insisted on building the missiles under license. This has created problems, as the Indian manufacturer has not been able to achieve sufficient quality control levels.

India deployed its first T-90 regiment (45 tanks) in May, 2002. The first T-90s were delivered to India in late November 2001. When they work, the T-90s are more than a match for anything the Pakistanis or Chinese have.

India recently revealed that it had negotiated a manufacturing license to build 15,000 Russian Invar anti-tank missiles in India where they are used by T-90 tanks. India has earlier purchased 10,000 of these missiles from Russia (that were built in Russia) and with the manufacturing license the average cost will be about $2,000 per missile.

The Invar 9M119M1 (Invar-M) is fired from the 125mm gun, like a shell, but operates like a guided missile. The 17.2 kg (37.8 pound) missile is 680mm (26.7 inches) long and has pop-out fins (with a 250mm/9 inch span) that aid in guidance (laser beam riding, controlled by the tank gunner). The missile has a max range of 5,000 meters at a speed of 350 meters a second (14 seconds max flight time). The Invar enables the tank to hit targets at twice the range of the 125mm shells. The tandem warhead can penetrate up to 900mm of armor (35.4 inches). Invar has been around for two decades and India is buying the latest version, as well as the license to manufacture another 15,000 of them.

India expects to have about 1,400 T-90s by the end of the decade. The first T-90 entered service in 1993, and India is the largest user. The T-90 is basically an upgraded T-72, which India already builds under license. The T-90 weighs about 15 percent more than the 41 ton T-72. The T-90 has a better fire control system, night vision that is good out to about 1,500 meters, and electronic countermeasures against anti-tank missiles. The autoloader, which often failed in the T-72, is more reliable and that makes the three man crew (commander, gunner, driver) more effective. The T-90 has ERA (Explosive Reactive Armor) in addition to its composite armor.

The T-90 is not as lively as the T-72 and is actually slower on the battlefield than the U.S. M-1 (which has a horsepower to weight ratio of 24:1, compared to only 18:1 for the T-90). The 125mm gun of the T-90 is basically the same as the T-72. However, if you use better ammo, you stand a chance against top rated tanks like the M-1. But that is not what India expects to face. The most likely opponent is Pakistan, which is largely equipped with 1950s era T-55s (actually the Chinese T-59 copy). The Pakistanis also have 700 or so older T-72 type tanks (Chinese T-69 and Ukrainian T-80), but these would be outclassed by the T-90. India plans to have 21 tank battalions ("regiments" in the Indian army) of T-90s (with 62 tanks each) by 2020. Actually, each battalion only has 45 tanks going into combat. The other 17 are for training and replacements. The T-90S can fire anti-tank guided missile. The system is intended to engage tanks fitted with ERA (explosive reactive armour) as well as low-flying air targets such as helicopters, at a range of up to 5km. For explosion and fire safety reasons some ammunition allowance is stowed in a special hull rear section.

The T-90S is motorized with a new V-92S2F engine which reduces the fuel consumption, and he is also more powerful. The new T-90S can run at a maximum speed of 60 km/h on road.

To increase the protection of the tank, the T-90S is fitted with new armor plates to each side of the hull, to protect the suspension against anti-tank rockets. The rear side of the hull is equipped with wire cage armor, same as for the turret. A new three sets of armor are mounted at the front of the turret.