Russia Plans to Field the T-99, a Radically New Main Battle Tank by 2015 The Russian Army is planning to begin modernize its armored and mechanized forces beginning in 2015, fielding a new family of vehicles comprising a new main battle tank, armored infantry fighting vehicles, and various support platforms. The MBT will be based on the new Armata, the prototype is scheduled to enter field trials in 2013, about 10 months ahead of schedule. First Deputy Defense Minister Alexander Sukhorukov said. The new tank is under development at Uralvagonzavod in Omsk. The first deliveries of the tank to the Russian Armed Forces are scheduled for 2015. A total of 2,300 MBTs are expected to be supplied by 2020.

It should be remembered that the Russians are building their fighting forces not only against NATO, but more importantly, to protect their long southern borders with radical Islamic countries that may be gathering military power, and the growing dominance of China in the east. Armored and mechanized forces are key to maintaining military superiority or parity against such threats. The level of sophistication in meeting such threats is not as demanding as meeting the advanced technology fielded by US and NATO forces. According to preliminary reports, the new tank designated T-99 will be less radical and ambitious than the failed ‘Object 195’ or T-95, it will weigh less, therefore, become more agile and will be more affordable, compared to its more ambitious predecessors.

You are reading an abstract of the article. The full version (848 words) is available to members only. Subscribe now to read this article and gain full access to all our web-based content.

The Russian industry is also developing the Boomerang family of 8×8 wheeled armored vehicles which will gradually replace the current BTR-90. Additionally, the Kurganets-25 tracked armored vehicle provides high degree of commonality with the new Armata tank. The Kurganets-25 will evolve into various models, gradually replacing BMP and BMD and MT-LB and other types of tracked armored platforms. 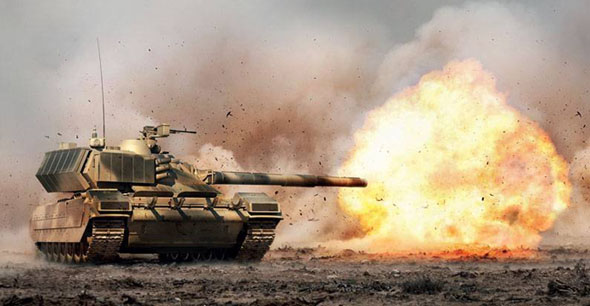 An artist concept view of the T99. Despite Russian occupation with ever higher caliber guns for their new tanks, the T-99 will be equipped with an improved version of the current 125mm cannon.