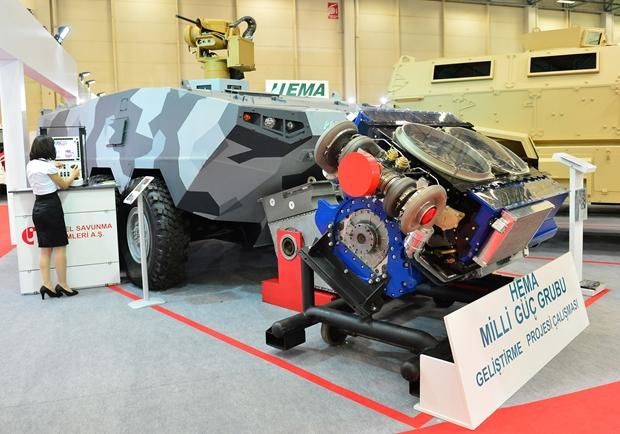 TAI (Turkish Aerospace Industries) and Finmeccanica - AgustaWestland are pleased to announce that the Turkish Armed Forces have taken delivery of their first “T129 ATAK” Advanced Attack and Tactical Reconnaissance Helicopter on 22nd of April 2014. This delivery, celebrated during an official ceremony on June 10th, is the first of 59 helicopters, 9 in T129A Early Delivery Helicopter (EDH) configuration, and 50 in T129B configuration.

Hurkus turboprop trainer made by TAI

According to reports from Turkey, an unnamed government official said Zeidan toured the TAI production facilities on January 3 and was briefed on the possible sale of the two aircraft. The official said TAI is optimistic that Libyan official and the company will start discussions regarding a possible sale, which could be an entry point into for Turkey into the Libyan weapons market.

“We are hopeful about a powerful entry. The Libyans are keen to explore possibilities of cooperation. Libya could be a promising market soon, especially in view of the fact that political relations are excellent,” the official said. Turkey has been developing the T-129A helicopter in partnership with British-Italian aircraft manufacturer AugustaWestland.

So far, the initial T-129A has been used for flight testing while the full specification T-129B is still under development. However, the Turkish company is required to seek US permission to export the US-made LHTEC CTS800-4N engine which powers the T-129 before concluding any sales agreement with Libya.

Zeidan also expressed interest in acquiring the indigenously developed Hurkus-C basic trainer and close air support aircraft. Powered by a 1 600 horsepower engine, the aircraft has a maximum speed of 574 kilometres per hour.

It can fly up to an altitude of 10 577 metres and has an average lifespan of 35 years (or 10 500 flight hours). According to a serial production agreement reached between TAI and the Turkish government on December 26 last year, the company will produce an initial 15 Hurkus-B aircraft which will be equipped for basic pilot training, instrument flying, navigation training and weapons and formation training.

Addressing Turkish media during a joint press conference with Turkish Prime Minister Recep Tayyip Erdogan in Istanbul, Zeidan said the two countries have reached ‘preliminary consensus’ on the purchase of 20 000 military uniforms and 20 000 assorted weapons. He also expressed interest in buying Turkish-made patrol boats for the Libyan coastguard. IHS Janes reports that Libya is interested in the purchase of Arma and Cobra armoured vehicle’s from Turkey’s Otokar.

Libya is still struggling with insecurity problems and is attempting to bolster the military following the fall of Muammar Gaddafi in October 2011 after nine months of civil war.

Since then, the country has descended into chaos with various post-revolutionary militias, some of whom are alleged to be aligned to Al Qaeda, operating throughout the country.

Turkey is also part of a group of nations which include the US, UK, France, Italy and some Gulf Arab states which are actively training the Libyan Army and providing various forms of assistance which include weapons and logistical supplies. Approximately 1 000 Libyan soldiers were trained in Turkey last year, according to IHS Janes, and another 2 000 will be trained as well.

A total of 15 000 Libyan troops will be trained over the next five years. Turkey, Italy and Britain have pledged to train 8 000 soldiers and police.

The first Turkish-made center fuselage for the F-35 Lightning II has been delivered to Lockheed Martin and Northrop Grumman by Turkish Aerospace Industries.

TAI said the center fuselage was delivered Wednesday at a ceremony at its manufacturing facility in Ankara and will be installed onto the aircraft by Lockheed in Texas.

"Delivery of the first F-35 center fuselage is a major step by TAI to demonstrate its commitment to adding value to the (F-35) program," said Muharrem Dortkasli, president and chief executive officer of TAI. "TAI invested in brand new, state-of-the-art facilities, machinery, equipment and tooling to manufacture the most advanced and complex assembly of the F-35, fifth-generation fighter aircraft.

"It is now time to begin delivering world-class TAI center fuselages to the final production line at an increasing rate every year."

It said once the F-35 program reaches full rate production, it will ship three center fuselages a month to assembly lines in the United States and Italy.

First T-129 to be delivered in April

Head of the Turkish Undersecretariat for Defence Industries  (SSM), Mr. Murad Bayar, has announced that the first of the highly anticipated T-129 ATAK helicopters is set to be delivered to Turkish Land Forces in April, government’s semi-official Anatolian News Agency (AA) reported.

T-129 is Turkey’s re-configured and nationalized mid-weight attack helicopter based on the Italian A-129 Mangusta by Agusta-Westland. It features an improved engine that increases both the range and flight ceiling of the helicopter, an indigenous mission computer designed by Turkish electronics powerhouse Aselsan, improved avionics and sensor suites, as well as various foreign and domestic missile systems boosting a newly added air-to-air guided attack capability.

Turkish Armed Forces will receive a total of 4 T-129 attack helicopters in 2012, and 5 in 2013. Rest of the order, totalling 51 gunships in various configurations, will be delievered through 2017.

Turkish Aerospace Industries (TAI) is the prime contractor of the project and is responsible for the production of airframes and integration of subsystems into the helicopters. Aselsan is the main developer of electronics, mission computer, navigation, communication and sensor systems.

Bayar said that T-129 is technologically among the world’s top attack helicopters, and as a true multirole platform, will serve Turkey’s needs in all theaters of operation.