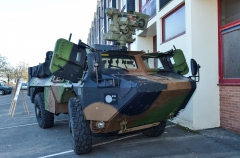 The Scorpion project brings in much-needed development work on two key vehicles — the engin blindé de reconnaissance et de combat (EBRC), a fighting vehicle to replace the AMX 10RC and ERC 90; and the véhicule blindé multirole (VBMR), a troop carrier taking over for the aging véhicule avant blindé (VAB). A little-expected boon will be parallel studies for a planned modernization of the Leclerc tank, which neatly ties the engineer’s work on the turrets of the light and heavy combat vehicles.

The last of the 630 vehicles for the French véhicule blindé de combat d’infanterie (VBCI) program will roll off the line in 2015, keeping pressure on Nexter to win export contracts for the infantry fighting vehicle which has seen action in Afghanistan and Mali.

Meanwhile, Burtin gives a hint of the need to address the European legal framework, seen as vital to allow a possible cross-border deal with partners that is considered vital for the future.

Q. President François Hollande has assured the French defense budget is safe from cuts and will follow the multiyear budget law. Do you feel reassured?

A. The prime minister, president and defense minister confirmed the outlook for the multiyear budget law. The minister then confirmed orders for the [Multi-Role Tanker Transport] and Scorpion. There was also a call for the ministry to improve program management. We are satisfied.

And there is defense of jobs. Last year there was realization of the 165,000 defense industry jobs and the impact on the ground. So the Scorpion program is effectively confirmed for 2014. We have a stake in the game.

Q. How do you see the global market?

A. We are very concerned about the international side. When I meet the authorities, parliamentarians and media, I talk about how defense companies must immediately press ahead on the international front. I know there is worry about the French forces and their equipment, but I stress that defense industry is looking at the international market. There’s an active market. There’s still a slow bureaucratic process but one which remains active. In Europe, even if we say there is a slowdown, there are significant opportunities such as Denmark, which is looking to order artillery and armored vehicles, and Poland, which offers significant opportunities.

Q. What is the outlook for the new troop carrier?

A. In the Scorpion project, there are digital communications following last year’s contract for the software defined radio, a significant system. That’s what we’ll put on board our vehicles to make a digitized battlefield. For us, there is [the véhicule blindé multirole (VBMR), engin blindé de reconnaissance et de combat (EBRC)] and the upgrade of the Leclerc.

Don’t forget the Leclerc. It’s a very important program. During the budgetary talks last year, I pointed out the Leclerc remains a power weapon. The president’s decision confirmed the Leclerc is part of defense and deterrence. We have submitted our offer for version 2, to modernize 201 Leclerc tanks. We expect a launch decision this year; I can’t comment on the contract value. We will install the Scorpion digital information systems, upgrade survivability and the attack system with a remotely operated turret, and program munitions and other new ammunition.

Q. What’s the timing of the troop carrier and fighting vehicle?

A. We will begin with [VBMR] development and then manufacture in the next budget law. That is part of the synchronization of Scorpion. We will work on the VBMR and EBRC together under the same constraints. We will have slightly longer development for EBRC as we have a more complex tank than the VBMR utility vehicle.

There is also the funding schedule. We hope to start delivery of 92 VBMRs in 2018, and start in 2020 for EBRC. That will reflect the time needed for development and also the delay in funding. For us, this is the industrial base for the next 10 years. That’s what’s at stake for Nexter, and for [Renault Trucks Defense] too, though I think they’ll explain that themselves.

Q. What’s your 10-year business model? What about merging with Renault Trucks Defense?

A. We set out our business model for five years. One builds a business model from the market. We are, and will remain, a specialist in land systems; it’s the core business. From that, our leading business model is to deliver high-performance systems, try to broaden the range and to make it competitive.

Our model, before talking about partnership and mergers, is internal growth. To prepare for the future, 18 percent of annual sales is invested in innovation, half of which is from company funds. There is development of the company’s potential and products. We presented a new product, Titus, at [Defense and Security Exhibition International] and eight months later, we have already delivered a demonstration abroad and are preparing for two more. We have requests. What clients say is, “it’s great.” It’s a concept we’ve developed, a six-wheeled vehicle with high mobility.

Q. What are the foreign prospects in view of Canada’s rejection of Nexter for its close combat vehicle?

A. Canada was five years’ work for nothing.

The markets are very active. There are four important targets for us — Denmark, Qatar, a [Middle East country that Nexter has agreed not to identify publicly] and India. We are very active on these markets, whether it be vehicles, artillery or maintenance. Last year we created Nexter Systems India, and continue to develop our partnerships. We formed partnerships with Raytheon, Bombardier and Prevost in Canada. We’re pursuing the same approach with Danish and Polish companies. We’ll probably sign at Eurosatory a partnership for the mounted gun system artillery for India and confirm a tripartite partnership.

A. We are a company on “project contracts,” we are not on steady volume like the car industry. We are like others in the defense industry, apart from the manufacturers of essential equipment. As you win contracts, or fewer contracts, so your sales will fluctuate. We are above €900 million. With the new group structure, we will be at €1.3 billion. That will be a figure including Eurenco, Macer and Simmel. The deals are done.

We are continuing to work on other projects. We’re in talks to buy Paul Boyé [a supplier of service uniforms and nuclear, bacteriological, radiation and chemical protection gear]. The company works closely with Sagem on the Felin combat gear. The deal should close in 2014. We’re an active group and growing, with the 2014 sales target of €1.3 billion and 2,400 staff.

Q. Why the acquisitions in the munitions sector?

A. We are the fourth European player in munitions, with annual sales of €400 million, 1,000 staff, and three firms outside Nexter Munitions which keep their own brands, product range and are coordinated to develop synergies. There is enthusiasm to compete with BAE Systems, Nammo and Rheinmetall. We seek savings in research and development, common purchase of supplies, and strengthened competitiveness through mutual benefits. Munitions contribute some 31 percent of group sales and we now supply land, air and naval munitions. The acquisition delivers a full product range and has world presence. The companies are in good health. Chemring sold to repay its debt and focus on core business. The companies have prospects and positive results. Nexter’s policy is to post 10 percent annual operating profit right from the start. Nexter won the competition to buy Chemring’s two subsidiaries; we bid the right price.

Q. What about consolidation in the European defense industry?

A. Everyone talks to everyone else. The game goes on, with the shareholders’ constant support to develop discussions in Europe, to create a European leader under European shareholder control, which maintains and strengthens our autonomy of equipment. That is the objective. It’s not for tomorrow. The Europeans are working on it, not just the French.

Q. What about a partnership with the Germans, Rheinmetall and Krauss-Maffei Wegmann?

A. The discussions continue with the Europeans. The construction of Europe takes time. But it’s a passionate subject. When one is building a European defense it is an entirety about the company, market and regulation of the company. The company has to find its business interest. The market has to open. There are the two [European armaments] directives. For European defense to advance, there has to be progress in Europe for the companies, markets and law. Scorpion was a France special. Time has been given to build the company, market and laws which apply. Of the two [European] directives, one refers to cross-border transfer of technology. So the defense company must be a European company and know under which body of law [it] works: How will it transfer the products and components? The Europeans are working on it; it’s reassuring. We, the Europeans, are working on the future of European defense