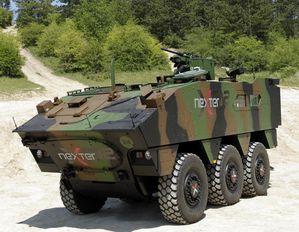 PARIS — Nexter is sending its XP2 armored vehicle technology demonstrator and CTA International 40mm cannon to this week’s Association of the U.S. Army (AUSA) show, both bearing the French company’s hopes of winning orders from the U.S. Army and other forces, a company executive said.

The M113 saw service in the Vietnam War.

The XP2 is a six-wheel-drive vehicle in the 20-ton class, designed to show “capability for innovation and know-how in armored vehicles,” Lier said.

The French vehicle is designed to provide a high level of protection up to the NATO Standard Agreement 4 level, offer high mobility and be equipped with advanced onboard electronics and 360-degree camera vision, Lier said. The vehicle can carry nine soldiers and rations for two days, and its motor can be changed in an hour, he said.

General Dynamics is expected to pitch its Stryker, while BAE Systems has said it will offer a modified Bradley infantry fighting vehicle.

Navistar has said it is interested in competing with a partner.

The U.S. Army, which could buy up to 3,800 units, has said it would likely opt for a vehicle already in service and has set a cost target of $2.4 million per vehicle.

Another potential buyer of the XP2 is the Australian Army, with a requirement for about 1,500 armored vehicles under its Land 400 program, Lier said.

The Australian planners have not yet said whether the new vehicle will be tracked or wheeled, Lier said.

Nexter developed the XP2 as a contender for the French Army’s Véhicule Blindé Multi-Role (VBMR), a multirole armored vehicle, for which the previous Army chief of staff set a price cap of 1 million euros ($1.3 million) for the planned 1,000 armored personnel carrier units of the VBMR program. Army procurement is looking to buy more than 1,800 GCVs that will be armed with a 25mm gun, but that choice of caliber has sparked comments of “not enough,” Lier said.

Nexter hopes to spark interest with its CTA 40mm, built under the CTA International joint venture with BAE.

Nexter also hopes to sell the CTA 40mm to Australia, which is looking for a gun for its infantry fighting vehicle, Lier said.

“The 40mm could be a serious contender,” he said.

The GCV is intended as replacement for the Bradley. The French company had hoped the VBCI might be picked for the Ground Combat Vehicle, but the requirement for a tracked unit left the wheeled infantry fighting vehicle out in the cold.