Citing unconfirmed Russian media reports, Duowei claims that although Pakistan had shown an interest purchasing the Z-10s, which are designed by Russia's Kamov Design Bureau under contract from Beijing, China decided to give the helicopters to its "closest friend" for free.

The Z-10s, designed primarily for anti-tank missions with secondary air-to-air capabilities, will reportedly be added to the Pakistan Army aviation fleet and be deployed in the ongoing fight against terrorism in the country. The helicopter is said to be capable of targeting the enemy in the air or on the ground with a range of 3-4 kilometers without appearing on radar.

Some military experts have cast doubt on the effectiveness of the Z-10 on counterterrorism operations, saying that its WZ-9 operation engine has relatively low power as well as a smaller payload and weaker defensive capabilities in comparison to other attack helicopters.

Even if the reports of the gift are true, Duowei said, the new Z-10 helicopters will only enhance Pakistan's position against India, which is about to pair its domestically produced light combat helicopters with newly imported AH-64 Apache attack helicopters manufactured by Boeing. Though there is still a sizable gap between the power systems of Z-10s and Apaches, the Chinese aircraft's body design and weapon system configurations are comparable to the world's most advanced attack helicopters, especially because of the excellent performance of its TY-90 air-to-air missiles.

For China, the "gift" to Pakistan could serve as a gift for the givers as well, as it might allow the PLA to see how the Z-10s perform in actual combat situations, providing valuable data for further research and development, Duowei said. China may have already been collecting information on its domestically produced weaponry acquired by Pakistan in recent years, including the MBT-3000 tank, the JF-17 Thunder combat aircraft and the F-22P general purpose frigate. The decision to make the Z-10s a gift instead of selling them could therefore stem from Pakistan's limited defense budget and China's relatively robust arms industry, Duowei added.

A Chinese army attack helicopter crashed on 4 March 2013, hospitalising both its crew members but without causing fatalities.

Operated by the People's Liberation Army Air Force, the CAIC Z-10 helicopter gunship came down in a farmer's field in Shaanxi province, central China. Little information on the crash's circumstances have been released but Chinese media reports indicate that it left controlled flight and descended almost vertically prior to impact.

Images subsequently published intimate that the accident wrote off the helicopter, while eyewitnesses have described how the pilots involved were extracted from the Z-10's two-place cockpit and rapidly relocated to a nearby medical facility.

Roughly the Chinese equivalent of the US-built AH-64 Apache, the Z-10 has a top speed of more than 300 kilometres per hour and an 800+ kilometre range. Like the Apache and other modern-day battlefield helicopter designs, the type has a slim fuselage, minimising its cross-section when viewed on enemy radar screens.

According to data published by IHS Jane's, it is used by five or more PLAAF aviation regiments: the 1st, 5th, 6th, 8th and 9th. The Chinese helicopter crash site's location would suggest that this example served with the 1st Army Aviation Regiment, based in Xinxiang.

The People's Liberation Army Air Force is one element of China's PLA - the largest military forces in the world. Active since the late 1940s, the air force is equipped with a multitude of military aircraft old and new, totalling some 2,500 airframes. On the rotary front, besides the WZ-10, it also flies the Harbin Z-19 and Changhe Z-11 helicopters in the attack role. 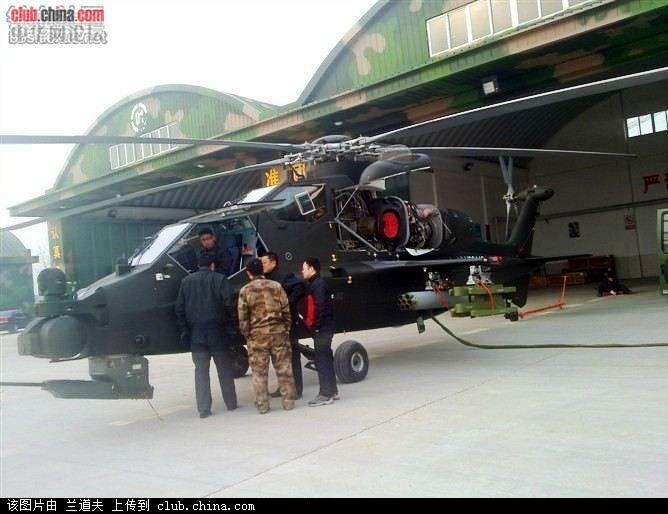