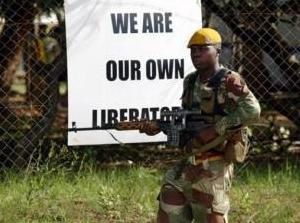 Zimbabwe National Army (ZNA) soldiers have been told to spend every second month at home on paid leave in order to save money on food and other expenses at barracks, Zimbabwean media are reporting.

In 2014 the Army introduced two week breaks every month for soldiers in an effort to save money, according to The Independent, but is now expecting soldiers to take every second month off, although they may be recalled at short notice if needed.

The ZNA has experienced funding issues in the past – last year soldiers at Bulawayo’s Imbizo Barracks and 1 Brigade faced food shortages and there are also reports that retired soldiers are not receiving pensions and that service providers are not servicing the Army due to unreliable payment for services rendered. Soldiers have also had their pay dates delayed, most recently by almost a week in January this year.

Last year junior soldiers told the Zimbabwe Independent their superiors had ordered them to seek alternative accommodation when they are off duty. The move was meant to reduce the number of personnel staying in barracks, thereby cutting down on utility bills.

In early April, a parliamentary report on Defence and Home Affairs said that some soldiers have not been able to access healthcare because of the army’s debts. The report also stated that Zimbabwe’s security forces were failing to fulfil all their functions because of a lack of funds.

This year Zimbabwe’s armed forces received a record US$380 million budget, with the extra money set to go to the recruitment and training of more soldiers and acquisition of essential military equipment including new aircraft for the air force.

Finance minister Patrick Chinamasa said in addition to recruitment, training, salaries and troop welfare expenditure, the defence force needs to be well-equipped in order to guarantee the safety of the country as it progresses towards economic revival.

"The first line of defence in any country is a performing economy. Let us not take the peace and tranquillity that we enjoy in Zimbabwe for granted. It is there because we have a well-trained army.”

Chinamasa said the 2015 budget will also provide for a massive recruitment exercise which seeks to inject new and younger blood into the ranks of the national defence force.

Defence minister Sidney Sekeramayi said the $380 million budget is far too meagre and dismally failed to reflect the overall needs of the defence forces.