A milestone has been achieved by the AIR 9000 Phase 8 Project Office, with members of the Integrated Test Team (ITT) being the first Australians to complete their initial MH-60R (Romeo) qualifications.

The pair commenced their training with other aircrew from NUSQN 725 in early March. After a significantly compressed 9 weeks of accelerated study, computer based learning, simulators and flights they completed their final NATOPS Evaluation on 15 May 2013. The NATOPS check consisted of an open and closed book examination, oral examination, a simulator evaluation and a flight evaluation. The examinations and evaluations focused on ensuring LCDR Lam and LCDR Carey had a comprehensive understanding of the aircraft systems, HSM-40 SOP’s, United States (US) Airways and all Emergency actions in event of an aircraft malfunction. The process was designed to ensure they met the standards required to safely operate the MH-60R and also operate within US airspace. This now means they are the first Australians qualified on MH-60R as part of AIR 9000 Phase 8. 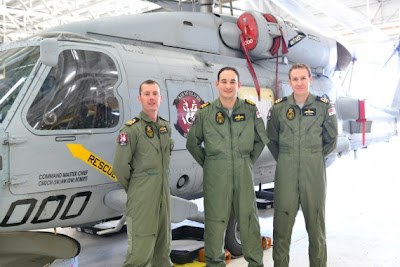 Both LCDR Lam and LCDR Carey have a S-70B-2, (Bravo), flight test background and agree that whilst a derivative of Seahawk family, the MH-60R is a far cry from the Bravo they have previously flown.

For LCDR Lam, the highlight of training has been exposure to the MH-60R modern digital cockpit and the new advanced mission systems focused on the Battle space.

“New systems such as data fusion, ISAR radar and Link 16 will enhance aircrew and ultimately the ship’s Operations Room’s situational awareness. Significantly, the re-introduction of the dipping sonar to Anti-Submarine Warfare (ASW) operations will provide a new and improved capability to the RAN."

For LCDR Carey, the highlight of training has been the interaction with the United States Navy (USN) flying instructors and the opportunity to participate in USN flying training again.

“Every single US instructor has been 100% invested in achieving our aim of being qualified. As always, I have been impressed with the professionalism, dedication and pure aviation skill that I have witnessed throughout my training.”

Both Lam and Carey were impressed with the rate in which their training progressed. The pair had up to four simulator or flight events scheduled per week, with their simulator events scheduled anywhere from 0700 until midnight. This was as a result of the Squadron’s training program of seven days per week, from 7am through until midnight which resulted in up to 20 training flights being available per day.

With NATOPS behind them, the steep learning curve does not stop. The team have a few more weeks to absorb the aircraft’s mission and weapon systems before relocating to Patuxent River in Maryland, south of Washington DC, the heartland of the US Navy’s Test community. They will join USN Test Squadron HX 21 to support testing of the Australian configured MH-60R, with the unified aim to deliver the first Australian aircraft in December this year.

Their achievement of a NATOPs qualification is a significant milestone in the ultimate delivery of the MH-60R back to Australia and will go a long way to ensuring there is an integral systems and airframe knowledge at a Flight Test level embedded in the RAN.