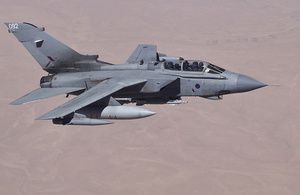 Operations against the Daesh terrorist network have continued at a high intensity over the holiday period, with Royal Air Force aircraft conducting air strikes in Syria and Iraq, particularly in support of successful Iraqi operations in Ramadi.

Armed reconnaissance missions have been flown daily by RAF Tornado GR4, Typhoon FGR4, and Reaper aircraft, focusing on supporting the Iraqi security forces during their offensive operations in Ramadi, and also in northern Iraq in the area around Mosul. On Wednesday 23 December, a Typhoon patrol to the east of Mosul conducted a total of six successful attacks with eight Paveway IV precision guided bombs, which destroyed four terrorist-held buildings and a tunnel, including ammunitions stores, several heavy machine-guns, and a sniper position. Further south, two flights of Tornado GR4s were contributing to the coalition air effort which supported the Iraqi army’s offensive into the centre of Ramadi. The Tornados conducted six attacks, again with Paveway IVs, and although on every occasion Iraqi forces were in very close proximity to the terrorist targets, careful planning and the accuracy of the weapons allowed all six attacks to be a success. The Tornados’ targets included three terrorist teams armed with rocket-propelled grenades, a sniper position, a Daesh group in close combat with Iraqi troops, and a large group of at least 17 terrorists, who suffered a direct hit. That night, a further pair of Tornados patrolled over Mosul, and destroyed two Daesh-held buildings with Paveways.

Thursday 24 December saw Typhoons operating near Mosul, where they destroyed another Daesh building with a Paveway, whilst over Ramadi, two pairs of Tornados again provided close air support to the Iraqi troops. The GR4s worked closely with other coalition aircraft to deliver two successful Paveway attacks on groups of terrorist fighters.

Missions continued on Christmas Day, with Tornados maintaining close air support over Ramadi. Once again working closely with other coalition aircraft, they used Paveway IVs against two terrorist teams, an anti-aircraft gun, and a massed Daesh group who were assembling for an attempted counter-attack on the successful Iraqi advance. Meanwhile, over Syria, an RAF Reaper struck a Daesh checkpoint south of Raqqa with a Hellfire missile. On Saturday 26 December, another Reaper patrolled over northern Iraq, where it destroyed a terrorist vehicle with a Hellfire, then supported a coalition air strike on a Daesh tunnel entrance.

RAF operations on Sunday 27 December focused largely on northern Iraq, with Typhoons using Paveway bombs to engage an armoured vehicle and mortar teams in the area of Tal Afar and Kisik. South-west of Mosul, a Tornado flight destroyed two terrorist-occupied buildings with Paveway IVs, then attacked a group of extremists in the open. A second Typhoon patrol over the northern region assisted Kurdish peshmerga in close combat with Daesh, striking two terrorist groups with Paveway IVs.