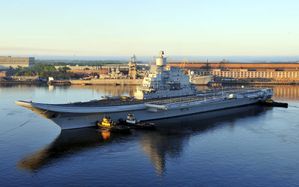 India may seek more than $100 million in penalty payments from Russia for delays in handing over the refitted aircraft carrier Vikramaditya, India's Economic Times reported on Tuesday.

The carrier - already years past its original 2008 delivery date - was supposed to have been handed over on December 4, 2012, but sea trials in September revealed the ship's boilers were not fully functional. Repairs to the ship's boilers could mean the handover is delayed until fall 2013, a United Shipbuilding Corporation commission investigation said last month.

“We may impose penalties for the delay,” an unidentified Indian defense ministry source told the paper. India may demand up to 6 billion rupees (about $115 million) which is around 5 percent of the total coast of the refitted ship.

Another source close to the Indian military industrial complex said New Delhi would be unlikely impose sanctions, as “it will negatively impact relations between the two countries in military-technical cooperation.” France has delayed delivery of six Scorpio submarines for more than three years, but India has not raised the issue of penalties over that contract, he said.

India and Russia signed the original $947 million dollar deal in 2005 for the purchase of the carrier, but delivery has already been delayed twice, pushing up the cost of refurbishing the ship to $2.3 billion.

Sevmash shipyard director Vladimir Pastukhov was fired in 2007 over his poor management of the project.

The Vikramaditya was originally built as the Soviet Project 1143.4 class aircraft carrier Admiral Gorshkov. The Project 1143.4 carriers and a class of destroyers with the same engines suffered a history of boiler failures during their lives.

The ship was laid down in 1978 at the Nikolayev South shipyard in Ukraine, launched in 1982, and commissioned with the Soviet Navy in 1987. It was renamed after the Soviet Union collapsed in 1991. In 1994, the Gorshkov sat in dock for a year for repairs after a boiler room explosion. In 1995, it briefly returned to service but was finally withdrawn and put up for sale in 1996.

The ship has a displacement of 45,000 tons, and an endurance of 13,500 nautical miles (25,000 km) at a cruising speed of 18 knots. It will have an air wing consisting of Russian-made MiG-29K jet fighter planes and Kamov Ka-31 early warning radar helicopters.