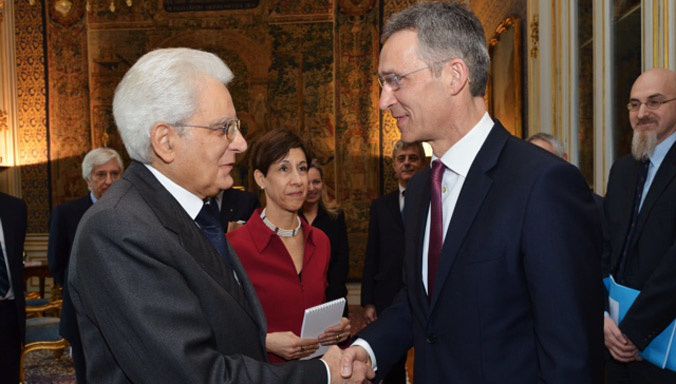 Arriving in Rome at the start of a two day visit to Italy on Thursday (26 February 2015), Secretary General Jens Stoltenberg underscored that NATO is adapting to “defend all Allies against threats from any direction”, east or south. He added that the Alliance is implementing the biggest reinforcement of NATO’s collective defence since the end of the Cold War, in order to respond to emerging challenges, including ISIL and instability in the Middle East and North Africa.

In meetings with President Sergio Mattarella and Prime Minister Matteo Renzi, the Secretary General discussed NATO’s adaptation to new security challenges. This involves “improving our situational awareness over our southern borders, and developing our maritime strategy,” Mr Stoltenberg said. The leaders underscored the importance of working with partners to keep the region stable, particularly in light of the deteriorating security situation in Libya. The Secretary General noted that NATO “stands ready to support Libya with advice on defence and security institution building.” He added that “by helping countries in North Africa and in the Middle East build up their defence capacity, we can project stability without always deploying our own forces.”

The leaders further discussed the crisis caused by Russia’s aggressive actions against Ukraine, agreeing that the Minsk agreement remained the best opportunity for a peaceful solution. The Secretary General welcomed “recent indications of reduced fighting,” but noted that “Russia continues supporting the separatists with equipment, forces and training.” Mr. Stoltenberg called on all parties to “fully respect the ceasefire and withdraw heavy weapons.” He warned that any attempts to expand separatist-held territory would be “unacceptable to the international community”.

The Secretary General thanked Italy for its valuable contributions to the Alliance, including major deployments in both Afghanistan and Kosovo. Mr. Stoltenberg further welcomed the leading role that Italy will play in NATO’s new Spearhead Force, which will enable the Alliance to respond rapidly to threats emerging from any direction.

On Thursday, Secretary General Stoltenberg is also meeting with Foreign Minister Paolo Gentiloni. He also held separate talks with Defence Minister Roberta Pinotti, as well as with members of the Foreign Committee and the Defence Committee of the Senate and Chamber of Deputies, including Italian members of the NATO Parliamentary Assembly.

On 27 February, the Secretary General will address personnel at the NATO Defense College in Rome, before travelling to Naples for a visit to Allied Joint Force Command Headquarters.