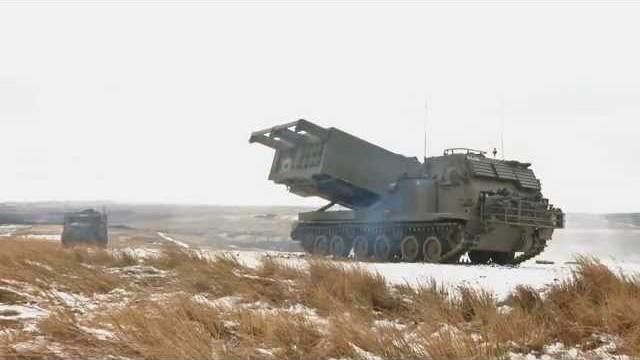 The new allotment of rockets will be delivered to the U.S. Army, Marine Corps and Republic of Italy.  Delivery will begin in April 2015 . Work will be performed at the Lockheed Martin facilities in Camden, Ark. , and Dallas, Texas .

Artillery: Yet Another New MLRS System

A Brazilian firm is upgrading its Astros MLRS (multiple launch rocket system) to include better electronics, more reliable mechanical systems, and GPS guided 180mm rockets. Astros already uses 180mm unguided rockets in a launching container, holding 16 of them and having a max range of 35 kilometers. Astros can also carry a container holding 32 127mm rockets with a range of 30 kilometers or one holding four 300mm rockets of three different types (ranges of 60, 90 or 150 kilometers). The 6x6 truck carrying these launchers weighs ten tons and also carries the three man crew and is armed with a 12.7mm machine-gun.

The new Astros 2020 system will work with all existing unguided rockets available, in addition to 180mm guided ones with a range of 40 kilometers. There will also be a container that can carry four of the new (still in development) 300mm GPS cruise missiles with a range of 300 kilometers. The Brazilian Army has ordered 30 of the new Astros 2020 vehicles. Export sales are more difficult because there is so much competition in this area and Astros 2020 does not bring much that is new or unique to the market. Actually, Astros 2020 is inferior to the competition. The existing, battle proven American MLRS is far more attractive to many buyers. The American GPS guided 227mm rocket is most frequently used from the HIMARS rocket launcher. Only costing about $3 million each, these smaller, truck mounted MLRS (HIMARS) rocket launcher systems carries only one, six rocket container (instead of two in the original MLRS vehicle). But the 12 ton truck can fit into a C-130 transport (unlike the 22 ton tracked MLRS) and is much cheaper to operate. The first HIMARS entered service in 2005, about a year after GPS guided rockets did.

The 309 kg (680 pound) GMLRS (guided multiple launch rocket system) missile is a GPS guided 227mm rocket. It was designed to have a range of 70 kilometers and the ability to land within meters of its intended target, at any range. This is possible because it uses GPS (plus a back-up inertial guidance system) to precisely find its preprogrammed target area. In 2008, the army tested GMLRS at max range (about 85 kilometers) and found that it worked fine. So the American MLRS has more than twice the range of the Astros 180mm rocket.

The U.S. Army is buying over 800 HIMARS vehicles along with 100,000 GMLRS rockets, most of them fitted with an 89 kg (196 pound) high explosive warhead. About half of that is actual explosives. These have been used with great success in Iraq and Afghanistan, where nearly two thousand have been fired so far. The guided rocket is much more effective than the older, unguided version and is replacing it in most cases. No more of the unguided rockets are being purchased by the U.S. The accuracy of GMLRS means that one rocket does the job that previously required a dozen or more of the unguided ones. That's why HIMARS is so popular. While it only carries six rockets, that's often enough to last for days, even when there's a lot of combat in places like Afghanistan.

The American MLRS also has an ATACMS long range version. This is a 610mm rocket that fits in the same size container that normally holds six 227mm MLRS rockets. The ATACMS has been around since the 1980s and current models have a range of 300 kilometers. The current version of ATACMS is equipped with a 227 kg (500 pound) high explosive warhead. The U.S. used over 700 ATACMS in Iraq and Afghanistan. These rockets use GPS guidance to precisely hit targets up to 300 kilometers away. The U.S. MLRS has been sold to seven foreign customers.

Over a billion dollars’ worth of Astros systems were bought in the 1980s. Typically an Astros battery consists of 3-6 Astros trucks, 3-6 resupply trucks, and one headquarters/fire control truck. The Brazilian Army only bought 20 Astros vehicles in the 1980s, with most of the sales going to Middle Eastern countries (66 to Iraq and 60 to Saudi Arabia). After the Cold War ended in 1991, sales collapsed and picked up by the late 1990s. But the cheap Cold War surplus systems dried up sales at the low end of the market and America, Israel, Russia, and China had plenty of new offerings for the medium and high end. Existing Astros customers will be able to upgrade their existing Astros vehicles to the Astros 2020 standards so they can use the new rockets.

Artillery: For Those Who Insist On The Best

Singapore recently ordered another 528  American GMLRS GPS guided 227mm rockets (packaged six each in 88 pods). That comes to about $182,000 per rocket. In 2007 Singapore ordered 18 U.S. truck mounted MLRS (HIMARS) rocket launchers. This system carries only one six rocket container pod (instead of two in the original MLRS), but the 12 ton truck can fit into a C-130 transport (unlike the 22 ton tracked MLRS vehicle).  The first of the 900 HIMARS vehicles were issued to American combat units in 2004. The U.S. Army is using most of the HIMARS, with the marines getting the rest. Singapore is one of several export customers. Singapore is also bought 192 GMRS rockers (32 pods) with that HIMARS purchase.

The 309 kg (680 pound) GMLRS (guided multiple launch rocket system) is a 227mm GPS guided rocket. It was first used in 2004. It has a range of 70 kilometers and the ability to land within meters of its intended target at any range. This is because of the GPS, plus a less accurate back up inertial guidance system, to find its target. Singapore is getting the rockets equipped with an 82 kg (180 pound) high explosive warhead. The U.S. Army has bought over 100,000 GMLRS rockets and this weapons has been used with great success in Iraq and Afghanistan. The guided rocket is much more effective than the older, unguided, version, and has replaced it.

Singapore apparently needs its GMLRS battalion in case there is war with Malaysia, with whom there are several disputes still unresolved. Singapore is one of the smallest nations in the world, occupying only 633 square kilometers of land. It spends $8 billion a year on defense. The island nation has a population of 5 million, and armed forces of 72,000 active duty troops. On a per-capita basis, Singapore spends more on the military, and has more people in uniform, than the United States. The Singapore military is one of the best equipped, trained and led in the region. Singapore also sits astride the most important shipping channel (the Malacca Straits) in the world. Singapore has the best educated and most affluent population in the region. With so much worth defending, Singapore is ready to take on any hostile neighbors (mainly Malaysia, which Singapore used to be part of.)

But there's more to the story. Singapore’s population is 75 percent Chinese, the descendants of ambitious emigrants who left China over the past two centuries looking to make a better life as "overseas Chinese." None have done better than the Chinese who ended up in Singapore. The city of Singapore was founded by the British in 1819, on an island at the southern tip of the Malay Peninsula. The British considered the local Malays rather too laid back and brought in thousands of Chinese and Indians to work the booming port city. Within six years, the population exploded from a few hundred, to over 10,000. Two years later Chinese became the most numerous ethnic group. They eventually came to dominate the rich port of Singapore, providing administrators, as well as traders and laborers. The British kept the key jobs, but otherwise ran a meritocracy. When Malaysia, which Singapore was a part of, became independent in 1963, many Chinese in Singapore protested being ruled by the Malay majority. The Malays also resented the more entrepreneurial and economically successful Chinese. Although most Singapore residents wanted to be part of Malaysia, it didn't work out. In 1965, Malaysia basically expelled Singapore, which become a separate, mainly Chinese, country. Over the next three decades, the Singaporean economy grew an average of nine percent a year, and Singapore became the wealthiest, on a per-capita basis, nation in the region.

With so much to defend, the Singaporeans developed, early on, a strong military. This was prompted by Britain withdrawing its garrison in 1971 and, in effect, telling the Singaporeans they had to defend themselves. Singapore asked Israel to help it develop a force similar to the IDF (Israeli Defense Forces). That is, a large reserve force, with a small active force to handle training and any immediate military needs. The two countries have been close allies ever since.

Thus Singapore has an active duty force of 60,000, most of them reservists undergoing training. There are only about 20,000 full time, professional troops. In wartime, there are 320,000 trained reserves who can be mobilized, plus nearly has many who have had military training, but are no longer in reserve units. Like Israel, Singapore can mobilize a force, armed with the most modern weapons and capable of defeating any of its neighbors.

The main criticisms of Singapore’s armed forces have to do with training, promotion and retirement policies. Singapore’s troops are the best trained in the region. All personnel train regularly, much like American troops do. But Singapore is also very safety conscious, and this limits many of the things troops can do. The reason for this caution is the low birth rate in Singapore (a universal side effect of prosperity), and the popular outrage every time a soldier is killed or seriously injured during training. The promotion policies are criticized because they emphasize test taking over practical experience. The retirement policies force every soldier to leave active service by age 45. This is done to keep the military leadership young, and provide a supply of experienced military commanders for management jobs in government and the civilian economy. Other criticisms knocked ethnic Chinese dominating the military and sundry administrative policies. Singaporeans accept all these criticisms as true, but not worth addressing. The end result has been a military force that is the best in the region. Troops from other nations, who train with the Singaporeans, come away impressed. The attitude seems to be, if it ain't broke, why fix it.