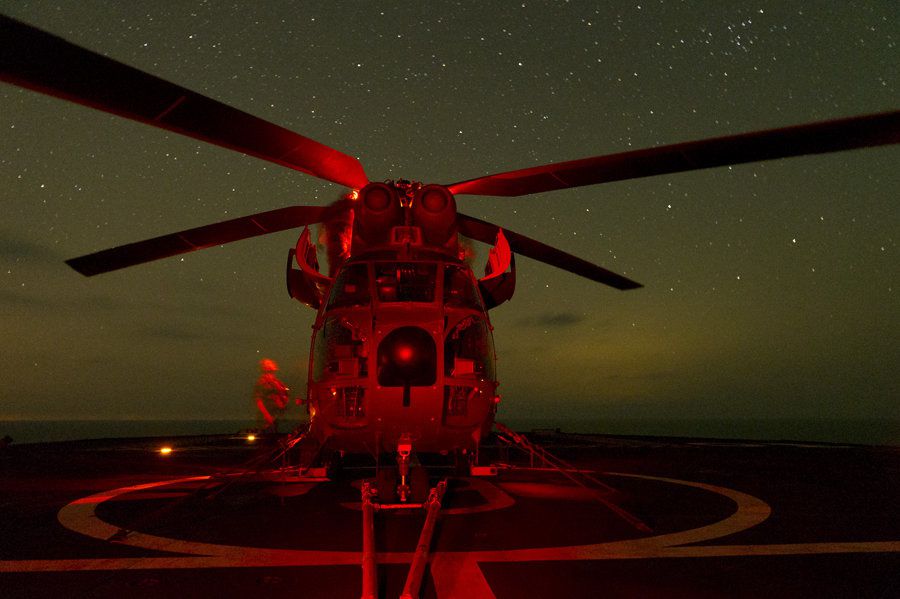 Initial lessons learned from air operations over Libya have been both encouraging and embarrassing for European air forces. The Royal Air Force has found itself dependent on capabilities that the U.K. government plans to cancel, and France found itself with the wrong weapons.

While the RAF believes it is too soon to talk about lessons learned from the ongoing Libya operation, it is clear from April speeches by Air Chief Marshal Sir Stephen Dalton, the chief of air staff, and his deputy, Air Vice Marshal Barry North, that platforms scheduled for termination have been of vital importance. Dalton told the Royal Aeronautical Society that Britain’s support of the NATO no-fly zone, known as Operation Ellamy by the U.K. Defense Ministry, “has proved further validation of the Combat Istar (intelligence, surveillance, target acquisition and reconnaissance) concept, with a layering of—and cross-cueing between—dedicated intelligence, surveillance and reconnaissance and Combat Istar assets and capabilities achieving a synergy that is greater than the sum of their parts.”

That synergy is provided by three Istar platforms—E-3D Sentry, Sentinel R1 and Nimrod R1—of which only E-3D remains part of the RAF’s long-term future. The electronic intelligence-gathering Nimrod R1 was due to leave service at the end of March. The capability is to be replaced by the acquisition of three RC-135W Rivet Joint aircraft, which the RAF will call Air Seekers. The first of these is still undergoing conversion work in the U.S., and the platform is not due to be operational until 2014. The Nimrod’s out-of-service date was postponed because it was needed over Libya. DTI understands that the two aircraft will go out of service on June 28, but any capability gap will be short. Joint RAF and U.S. Air Force crews will co-crew USAF-owned Rivet Joint aircraft ahead of delivery of the U.K.-owned airframes. British aircrew have been training with their American counterparts at Offutt AFB, Neb., since early this year. Co-crewed operations will begin in the summer.

Less clear is the future of the capability provided by the RAF’s Astor (airborne stand-off radar) platform, Sentinel R1. Sentinel’s ability to switch between synthetic aperture radar (SAR) and ground-moving target indicator (GMTI) modes makes it the fulcrum of the “scan, cue, focus” methodology the RAF practices. In their speeches, Dalton and North outlined how, on a hypothetical “typical” Ellamy mission, Sentinel performs initial assessment of both wide and specific areas of interest to inform further investigation by other platforms, as well as pointing out possible targets when in GMTI mode.

The coalition government’s Strategic Defense and Security Review of 2010 opted to retire the Sentinel force (comprising five Raytheon-modified Bombardier Global Express business jets and associated systems) once operations in Afghanistan end. While this date is not yet known, neither is the route by which the capability will be replaced. The Defense Ministry has a requirement for a future unmanned aerial vehicle (UAV), called Scavenger, which is expected to include key elements of the Sentinel capability, but no preferred solution is due to be identified until 2012, so an operational system is some years away.

Reaper and the soon-to-be-fielded British Army Watchkeeper UAV offer SAR, and both Reaper and Sea King 7 have a GMTI capability; but neither Reaper nor Sea King is likely to be risked in contested airspace, and neither has been deployed to Libya.

The unexpected Libyan conflict has pointed to crew management challenges in the RAF’s fast-jet fleet. The need for ground-attack-capable Eurofighter Typhoon aircraft and crew forced a reordering of operational priorities for the force, which had been concentrating on transitioning Britain’s air defenses from Panavia Tornado F3s to Typhoons (the last F3s were retired from service on March 31). Result: When the Libya operation was stood up, the RAF had—as planned for that timeframe—only eight pilots trained and current in the ground-attack role.

DTI understands that several of these were instructors on the Operational Conversion Unit (OCU), and this meant that OCU activities were wound down for some days as qualified crew deployed to Italy, the staging area. OCU activity has since restarted, with training priorities realigned in light of the changed operational need. The RAF now has 20 Typhoon pilots combat-ready for ground-attack missions.

Tactics initially adopted partly to take account of the crewing situation have become established best practice. The most challenging part of single-seat, fast-jet operations is laser-target designation, and in Typhoon’s first combat missions, the aircraft flew with a GR4 to “buddy lase.” Deployed Typhoon crews are now able to self-designate, but most missions are still flown in Typhoon/Tornado pairs.

This enables commanders to use the most appropriate munitions, conserving higher-cost precision weapons for missions where low-collateral strikes are needed. And crew tours are being kept relatively short—aircrews typically spend 6-8 weeks in Italy—to ensure that skill fade is reduced. This is a lesson learned with Harrier crews in Afghanistan. The RAF found that due to mission demands, skill sets such as night-flying or aerial refueling were not being used in-theater and had to be regenerated once crews returned home from six-month deployments.

For the French air force, the principal lesson learned from operations in Libya is that it needs smaller and more precise air-to-ground missiles. The Sagem AASM (Armement Air-Sol Modulaire), in the 250-kg (550-lb.) version in service, is too big. It’s like using a brick instead of a fly swatter to kill that pesky fly on the window.

“Everyone has precise, expensive, complex armaments which carry a heavy military charge,” French observers, who spoke on condition they not be named, told DTI. “We need to be able to use our air forces to very precisely destroy targets with low value and we are missing small effectors to do it with,” they say. “What we need, and nobody, not even the Americans have it, is something much smaller, such as a multiple missile-launcher. Everyone wants weapons that can do everything but the result is that we end up with things that are over-dimensioned for the job.”

In the absence of the Brimstone missile used by the RAF, which is smaller and more accurate than the AASM and can take out targets embedded in towns, the French air force decided to use inert AASMs in some situations. These weigh the same as live AASMs, but rubber or concrete replace the explosive. RAF Tornados destroyed Iraqi tanks with similar concrete bombs in 2003.

The inert bombs are equipped with the same GPS navigation systems as the real ones and are also accurate to within 1 meter (3.3 ft.). Dropped from a Rafale, they hit their target at a speed of 300 meters/sec. and do a good job of destroying a tank without causing collateral damage in a 200-meter-dia. circle around the point of impact.

The live AASM has two modes—programmed ahead of the mission if the target is a building or ammunition depot, for example; or programmed by the aircraft crew during the mission in Time Sensitive Targeting (TST) mode. Laser and infrared (IR)-guided versions of modes are in development and are not being used in Libya, a spokesman for manufacturer Sagem tells DTI.

The French air force was first to strike, on March 19, when it used AASMs to destroy a column of armored vehicles near Benghazi in eastern Libya. AASMs were also used to destroy a Russian-made S-125 (SA-3 Goa) surface-to-air missile system base from beyond its effective range, and, on March 24, to destroy a Yugoslav-built Soko Galeb jet trainer that had broken the no-fly embargo and was detected by an AWACS. The decision was made to destroy it once it had landed.

There is also an agenda that lies just below that of actual operations over Libya, one that has been brought into sharp focus over the past month: export sales. India’s decision to eliminate the Lockheed Martin F-16IN, Boeing F/A-18E/F and JAS 39 Gripen means that the aircraft downselected—the Typhoon and Dassault Rafale—are in their first head-to-head sales battle to date (see related story on p. 38). One of the ways each side will try to differentiate itself is by showing that its aircraft is truly “proven in combat.”

Dassault, backed by Thales and Snecma, will automatically say its product has been tested in battle already—Rafale first flew sorties over Afghanistan in 2002, although initial flights were limited to refueling Super Etendards involved with air-to-ground activities, and combat air patrols.

Once fully integrated into the NATO air-to-ground strike infrastructure, the Rafale has been included in close-air-support activities over Afghanistan. The first reported missions were in 2007, with Rafales flying from Dushanbe, Tajikistan, and the aircraft carrier Charles de Gaulle. However, little was made of these missions at the time, and the news tended to seep out through conference papers and the Internet, rather than being exploited for marketing purposes.

The trend of information arriving in the public domain about Rafale on operations, almost as if by osmosis, has continued with Libyan operations. French Rafales were seen from Day One armed with the Safran/MBDA AASM multi-seeker guided-bomb system, including the INS/GPS/imaging-IR version, apparently being carried for the first time. But one would be hard-pressed to know this from the downbeat French defense ministry press releases.

The U.K., on the other hand, has been far more upfront in trumpeting the multirole claims of the Typhoons deployed to Gioia del Colle, Italy. An April 13 press release announced the first operational drop of an Enhanced Paveway II (1,000‑lb.) laser/GPS-guided bomb by an RAF Typhoon, although its impact was reduced by the dispute about whether the RAF had enough qualified air-to-ground pilots.

—With Francis Tusa in London.